I recently had to say goodbye to my dog, Beebs.

She was almost 15 and had been sick on and off for weeks. She couldn’t walk well, I often had to hold her as she peed, and she had been pooping in the house for over a year. Her hair was falling out, she wouldn’t stop licking her back leg, which was a bloody mess, and she smelled bad.

But still. Still! She was my dog, my best friend. I loved her terribly and horribly. I couldn’t bear to let her go.

The night before she died I ran around downstairs squeaking her squeaky toys and sobbing because I could not bear, could not bear to let her go. I couldn’t conceive of a life without her.

I got Beebs as a puppy, though back then her name was BeeBee. I got her for my son, who was in fourth-grade at the time and about to go into the hospital for plastic surgery to repair damage to his lower face and jaw suffered during a car accident at the babysitter’s the previous year. He was scared of the hospital visit, scared of the surgery. So when a co-worker (thanks so much, George!) brought in a box of puppies to the newspaper where I worked, I took one home.

Back then, Beebs was a squirmy blend of energy, goodness, love and naughtiness. She came from sled dog stock; her grandmother was from Iditarod champion (and the first women to win the Iditarod) Libby Riddle’s kennel. She was part husky, part Labrador retriever, and possessed a cleverness that frustrated yet amazed me. She had the most beautiful face.

And she was fast (fast!). Those first few years she frequently slipped away and got into neighbors’ garbage cans or chased neighbors’ cats or brought home toys from neighbors’ yards (I can still picture Beebs prancing home with hockey stick firmly clenched between her teeth). She chewed up everything in the house, but only things that belonged to me; she never touched my son’s shoes or coats, never took a bite out of his mattress or ate chunks of his schoolwork.

But mostly, Beebs was a mountain dog. She loved running in the mountains, and as the years went by and my son became older, I began taking long hikes with her, up Wolverine and Bird Ridge, Falls Creek and McHugh Peak, Rabbit Lake and Flattop and Peak Two and just about everywhere else in between. We’d hike for hours, usually in the evenings, and often we were the only ones on the trail. I never felt lonely. She was great company. She was the perfect hiking companion.

Then my son graduated and went off to college and suddenly I was alone in the house with the dog and two cats. I relocated with my job down to Seward, a small town of about 2,000 at the end of the road system, and began to run long distances in the mountains. It was hard making friends in such a small town, hard finding the kind of heart-to-soul people I was used to having in my life, and I suppose that’s when I began to not only love but to cherish Beebs. My job as a news reporter further alienated me from the town (Once I walked in the Sea Bean Cafe and people got up and walked out, angry over something I had written in last week’s newspaper) and often Beebs was the only one I spoke to all day.

I preferred it that way. I’ve always been a loner and I did some of the best writing of my life while living in Seward. Each afternoon Beebs and I ran the Lost Lake Trail or Iditarod Trail. We ran to Tonsina Point and roamed the beach or hiked Mount Alice or braved the winds at Fourth of July Beach. We ran Mount Marathon Bowl or halfway up the mountain and then plunged down: Whhheeee!

We ran for hours in the summer twilight and the winter dusk, and as the miles passed and fatigue set in and my defenses peeled away and my ego dropped and I was left with my essential and vulnerable and real self, it was as if the two of us were able to communicate, not in words or even images but in some type of old, old language that predates speech, some type of nonverbal cues that must have once existed between humans and animals. Often, finishing up the run, I’d look down and feel momentarily stunned that Beebs was a dog. In my mind, during those runs, she became so, so much more.

Then Beebs began to age and slow down, right as I began to push for longer distance. And one day I met a man. I met him while running with Beebs, and I kept encountering him on the trails until finally I slowed down, opened up and let him into my life, this man who is also a runner, who also loves the trails and mountains, who doesn’t mind running long distances at my pace and my discretion.

Sometimes I think that Beebs led me to him so that I would have someone to run with after she was gone.

Sometimes I am absolutely and positively sure of this.

I still don’t know how to say goodbye to Beebs. I don’t know what to say except this: She was the best running companion. The best soul dog. The best damned dog in the world.

Keep on running, Beebs. I’ll see you when I get there. 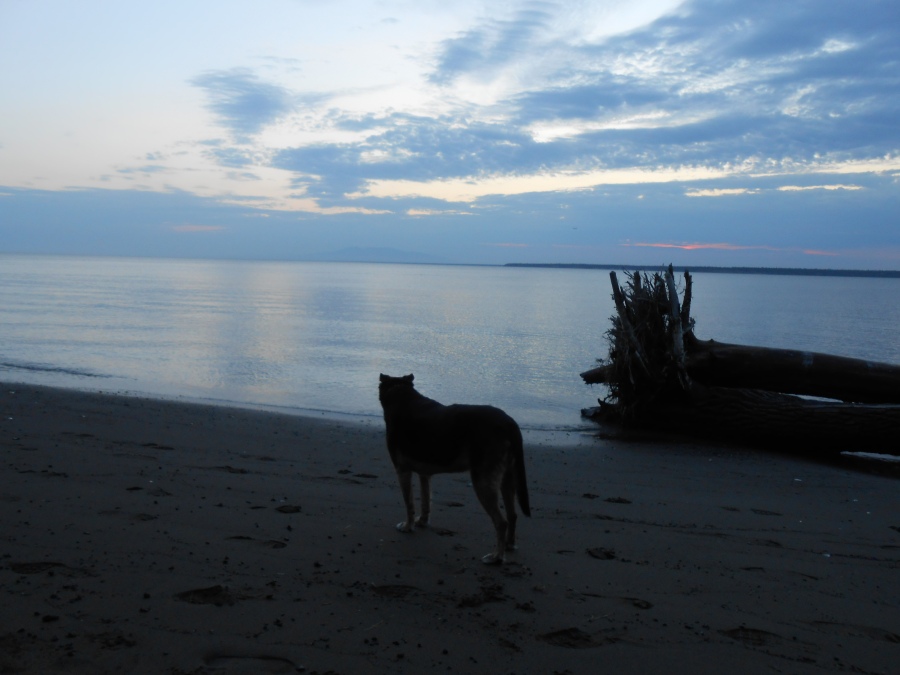 Before I go, I must share this poem by Laura McCullough, a poem that I read years ago and thought of, over and over, as Beebs was dying. It’s brought me such comfort. Words can often do that.

to a greater good, maybe to you
if you’re lucky and lacking the love

of a good dog, and that becomes
the firmament in the earthquake

your life is. Loneliness can’t enter
through that door—make your body

a door: what is overhead bears down
and the shape of nothing becomes

visible like your dog in the corner
who dreams silently, his legs pumping.

This is what you recall when his brave,
blue-black tongue lolls from his mouth,

so long, so thick you are shocked,
and you cradle it in your inadequate

hands to keep it off the cold, tile floor
in the last moments of his dedicated life

weeping like a child with the silly hope
you are the door he’s passing through.

Next up: Talking about dogs and loss, next up is Kari Neumeyer, who stops by to talk about Bark and Lunge: Saving My Dog From Training Mistakes, a beautifully written memoir.

14 thoughts on “Eulogy for Beebs, the best damned dog in the world”