Today we got an unsettling phone call from our friends out in Hatcher Pass. Rocky, their 17-year-old dog, had just died.

We knew it was coming. Rocky, half Rottweiler and half German shepherd, had been sliding downhill for over a year. When I housesat for them in January, Rocky could barely walk, his back legs lurching with each step. Still, he had a presence to him, a determination that I found admirable. At night he lay by my feet and grunted as I rubbed his tough and unruly belly. He took short walks, too, stumbling behind the other dogs, his head hanging slightly, as if in apology or perhaps pain (or, more likely, both). 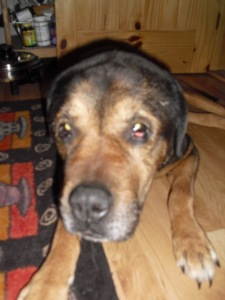 There’s something sad yet beautiful in watching a dog decline, something that brings out one’s generosity and honesty. Their fragility is both heartbreaking and wise.

And Rocky was wise. The first time I met him, he charged into my house,  lifted his leg and unselfconsciously peed over my sofa cushion. He was giving me a gift, marking his territory, saying, “You are one of my people.”

I no longer have that sofa or live in that house. In the years since, my son has grown up and left home, I’ve quit good jobs for better jobs, and then quit those for lesser opportunities that somehow made more sense. I’ve loved men, lost them, found them again and lost them and found them again. My own dog and cats are old, and one day I will be, too.

My friends buried Rocky in a grove in their yard, right outside the kitchen window so that he’ll always be near.

It’s a good spot, solid and sheltered and green. I think he’ll be happy there, if it’s possible to be happy in death. I imagine his spirit rising up late at night and roaming around the woods, digging holes in the garden and chasing squirrels and scaring off bears that sneak in the yard.

Rocky had a trick. David would say, “Mean dog,” and Rocky would snarl and growl and snap his very large and very sharp teeth so that he looked fierce, the kind of dog that might take off someone’s arm.

He wasn’t fierce, though, he was large and loving and noble, or as noble as a large and loving dog can be. He adored my dog, they were best buddies, rolling around sharing kisses and snorts and nips.

Goodbye, Rocky. Hope you’re up in doggie heaven, happily chomping biscuits and peeing on all the sofas.

2 thoughts on “Goodbye Rocky, you were a great dog”