I’ve been happily publishing away in both print and online journals, literary magazines and blogs, and I never once stopped to consider: Is someone plagiarizing my work?

Then I came across Diana Peterfreund’s insightful blog post, An Epidemic of Plagiarism in the Indie World. 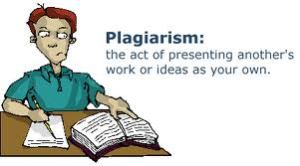 And, get this, it turns out that Jordin Williams isn’t even a woman but a man publishing under various female names. Worse yet, this “Williams” stole work from free fanfiction sites.

Ironically, according to Peterfreund, the only reason “Williams” was caught was that one of the fanfiction stories he ripped off was plagiarized itself.

“No wonder poor Williams  felt like he was the victim here,” Peterfreund wrote. “How was he to know his stolen work was already stolen?”

Peterfreund additionally cites a plagiarism incidence reported by Elizabeth Burns on the School Library Journal blog. This time, so-called writer Jessica Beckwith was  halted in the middle of a success blog tour after it was discovered that all of her work (all of it!) had been swiped from thirteen authors on Fictionpress.

“Each ‘author,'” Peterfreund writes, “was in fact merely a cover name and identity … for a person who was making money on Amazon by duping unsuspecting readers into reading fanfiction or other stories they could find on the net for free — stories that do not belong to them.”

Worse yet, this practice is advertised on marketing sites (Warrior Forum is one) as means of making quick money. Forum posters actually brag about it.

“These are not a few isolated ‘plagiarism’ cases,” Peterfreund writes. “These are not people who so desperately want to be writers that they are stealing other people’s words. These are not writers at all. They are actually more like book pirates.”

What chilled me, however, was what Peterfreund writes at the end of her article.

“Your work is being plagiarized right now on a fanfiction site or copied on a pirate site somewhere. I absolutely guarantee it.”

I can’t stop thinking about this. I can’t stop thinking about someone stealing my work, changing a few details and selling it on Amazon for less than what my publisher charges. The work I sweated and agonized over, the work that I spent years refining and editing, the work that belongs to me, that is me, could at this very moment be selling for another name by some sleazy little (excuse my French) fucker too damned lazy to get a real job and make his/her own money.

This bothered me so much last name that I browsed through Amazon selections looking for work similar to mine, frantically clicking and reading excerpts until I finally collapsed in the chair. It’s almost impossible for an author to discover if his or her work has been stolen.

And that is the scariest part of all.