I became lost earlier this evening while running a 10K race over the trails in Kincaid Park. I was talking with a running friend and we both missed the small yellow prompt and ended up at the finish line a mile too early.

I’m thinking of this because I’m stuck in Chapter Eight of my second novel. I’m struggling up steep hills of doubt and coasting back down the other side, my confidence temporarily restored until the next big hill.

Writing is like running, it’s like that old Nike commercial: You have to simply do it. You have to put in the time, and you have to do it regardless of sweat and pulled muscles, of days when every damned word stutters and lurches so that you can barely write a sentence without cringing at your own ineptitude.

It’s so damned difficult to write a book, to tell a story, to create a whole other world, complete with problems and familiarities, conflicts and plot lines, sub-plots and touches of warmth and tension.

Right now I’m failing miserably, or at least it feels that way today. I’m lost. I’m blind. I’m reaching out with pale and puny arms, trying to find a wall or couch or something, anything, to lean on.

But enough about my writing struggles. It’s summer in Alaska and we’ve been blessed with clear skies and 77 degree temps, a luxury in this land of chilled summers and god-awful winters. We’re up to more than nineteen hours of daylight here in Anchorage, and slowly gaining.

I wish I could explain the twilight and how it feels to stand on the beach or a mountain at midnight, the air silver clear and the horizon streaked from the setting sun. There’s an energy here, a feeling of expansiveness, of frantic inevitability because even in the midst of a night that never darkens is the terrible knowledge that soon it will end, the ground will freeze, the trees will become barren and my skin will be trapped miserably beneath layers of bulky clothes.

Until then, I’m making the most of it. I’m staying up late. I’m forsaking sleep. I’m up in the mountains, I’m walking the beach. I’m soaking up every single minute, and is it no wonder that I can’t write? How can I write when the sun shines and the nights lengthen and everything inside my chest, inside my blood, begs for me to get out and move? 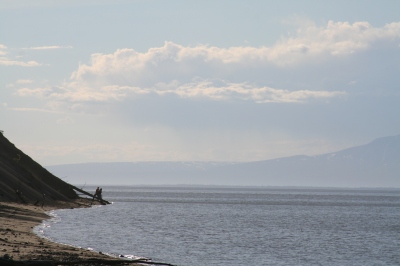 One thought on “Lost”