The holidays are over and the beasts have devoured their cat and dog treats. The tree is still up, of course. One year it stayed up until April because when you live in Alaska in the winter, you welcome any and all blinking lights.

My favorite gift? Not the Brooks Utopia running jacket, highly-prized and a bright bluish-purplish color, or even the Yak-Traks, to keep my feet from slipping while running icy trails. No, my favorite is this: 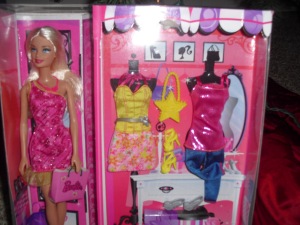 Growing up, my three sisters and I played with Barbie. We had suitcases filled with clothes and accessories and were forever losing those maddeningly little shoes. We also had Skipper and Madge, and one year for my birthday, I received a Penny Brite doll–did anyone else have one of those?

I didn’t like Penny Brite. She was small and chubby, at least chubby compared to the impossibly thin Barbie standards, and she wasn’t sophisticated. She reminded me of the counter girl at the Stuckey’s where we stopped for cinnamon buns after church, and I didn’t want to be a waitress. I told people that I wanted to be a beauty queen, but that wasn’t true, either. What I wanted was to be a hippie, like I saw on the evening news: Girls wearing fringed vests and tight jeans, their long, dirty hair flowing out behind them. I was born too late to be a hippie but still, that’s what I dreamed of late at night when I lay in the country darkness, so black it was almost purple, and all around nothing but silence and wind and the singing of the crickets.

I never really liked playing with dolls but pretended to because that is what girls did, and growing up out in the country, our nearest neighbors almost a mile away, individuality wasn’t stressed, especially among girls. Everyone conformed, and if they didn’t, they sat alone during lunch and were chosen last for dodgeball. Yet I always knew that I was different, could feel that I was different, and when I tried to mention this to others, to friends and later adults and teachers, they laughed and scolded and told me to stop acting fresh.

I don’t remember when I put the Barbie dolls away for good. Probably it didn’t happen all at once. Probably I put them away and then brought them back out again, not because I wanted to play with them so much as I wanted to touch those cold plastic dolls, smooth my hands over those cheaply-made skirts and prom dresses.

After I graduated from college, I headed out West with a boyfriend (I always knew I’d move out West, there was no denying the pull, the longing; the East had never felt like home to me), and during the long drive through prairie grass, with red-tinted mountains reaching up toward the flat, blue sky, I didn’t think of what I was leaving behind. I didn’t think once of my childhood; Barbie dolls were the last thing on my mind.

Years and years later, before I started writing my novel, when I was still just thinking of writing (which is so much easier and more enjoyable than the actual writing), I came across Barbie doll pieces when I walked the dog: An arm on the side of the road, a head in the woods, a leg out by Bird Creek Campground. I kept these all, took them home, washed them off and set them on the bookshelf. I knew they were a sign; I just didn’t know how to decipher the message.

Jump ahead about seven years and my book is finished (complete with many, um, Barbie references), publication date is a month away and I have a new Barbie sitting on my desk, still in the box. For some reason, I’m hesitant to take it out. Who knows where it might lead me next, what secrets it might reveal. Maybe there is another book, a sequel. Or maybe it’s more about endings, about closing that part of my life and moving on. I’m not sure yet; like I said, it’s still in the box. And I’m writing a new novel. Maybe, at this point, that’s all I need to know.

Happy New Year, everyone. I have a feeling that 2013 is going to rock with changes.