Please excuse the jumbled nature of this review: I was up until 6 a.m. last night, finishing Eternity Began Tomorrow.

I literally could not stop reading.

And it wasn’t just the story, which is intriguing, fast-paced and unpredictable (most of the time—I did guess at the ending). It’s that the writing is so smooth and clever that I couldn’t stop myself from reading lines over and over.

Here’s the rundown: Molly “Blazes” Bolan is a young reporter eager to get ahead. She writes for Sedan Chair (I know, a great name, right?), an online news outlet with lofty aspirations.

Her world shifts when she’s assigned to cover a cluster rally by eco guru John Truthing, a handsome and savvy dude with his eye on the 2020 presidential campaign.

Truthing’s followers take a “supplement” called Chillax, manufactured by an overseas company that links back to Truthing. This so-called supplement keeps his loyal followers mellow but engaged, exactly as Truthing desires.

When Blazes discovers information that threatens to bring Truthing down, she hesitates. She’s sort of, kind of fallen for the guy plus her brother is now in deep with Truthing’s cult-like organization.

There’s a lot of politics thrown in with the mix, a lot of references to the Trump administration, and to the climate change crisis, and to the many ways we’re ruining the planet with our continued greed, and our quest for excess.

But this is only part of the story. What makes Eternity Began Tomorrow so enjoyable, and readable, is the rich inner layer Brennan supplies to each character, even the minor ones.

Brennan’s depiction of Blazes is spot-on. She’s tough, eager, not afraid to take chances and ready to go any length to nab her story. Yet she’s also vulnerable at times, and needy, and insecure. She makes bad decisions. She says the wrong thing. She’s comes across as so real that after I finished, I felt as if I knew her, as if I had worked in the Sedan Chair newsroom alongside of her.

Brennan wisely introduces us to Blazes’ parents and their marital problems, and by the time Blazes visits at Christmas, her father is living in a crappy trailer while her mother struggles with a midlife crisis. It’s a poignant scene, and Brennan handles it with skill and finesse.

While some readers might find the ending abrupt, it isn’t. Brennan leaves subtle hints throughout the book, hints reminiscent of the sticky-notes reporters litter across their desks, reminding them of this appointment, that source.

The best thing about Eternity Began Tomorrow isn’t the plot, the vital political messages or even the snappy dialogue and visual scenes. It’s the warmth and the fallibility that Brennan brings to each character, how you can almost feel them breathing beside you as you read. 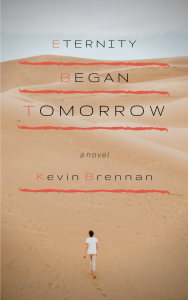 One thought on “Review: Eternity Began Tomorrow, by Kevin Brennan”