Well, this is embarrassing but here it is, my Throwback Thursday reminder that a) I don’t look good in really long hair and b) my younger sister will always be the more poised, polished and sophisticated sibling. 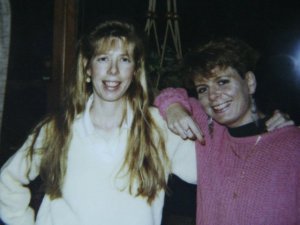 Back in college I majored in English, because it seemed easy and I liked to read. I was on a track and cross country scholarship at the time and ate, drank and slept running, though I still read a lot, I read all the time: Riding out to track meets, in the morning after an easy run, during most of my classes. I favored myself a poet back then (another embarrassment) and devoured Adrienne Rich and Gary Snyder. I used to fantasize about how I would meet Snyder and he would fall in love not only with my long and messily-groomed hair but with my lyrical and unique poetic style.

The first poem I wrote for my college workshop was titled “Come, Eyes of the Night” and it was as bad, though probably worse, than the title indicates. The instructor actually choked (on laugher?) as he read it out loud to the class.

I wasn’t deterred. I wrote another, and then another, and yet another, and then I got a bit tired of writing poems that no one wanted to read, and by the time I was a sophomore, I had ditched English and decided to become a great anthropologist. I had a crush on Richard Leakey (sorry, Gary Snyder) and spent my weekends holed up at the library at Western Michigan University reading anthropology journals (Go, Broncos!, though I never went to any games because I was too busy fantasizing about going on archeological digs with Richard Leakey).

Sometimes, though, when I became tired of reading about bones and death I’d sneak over the literary magazine section and read short stories and poems, and soon I was writing again, though secretly; most of my anthropology friend scoffed at the idea of literary writing.

Then, in a blink of a wrong turn, my life changed.

It’s was early evening and I was on my way to an anthropology conference and got off the stairs on the wrong floor and ended up in a room filled with people sitting on the floor and staring up at a woman with frizzy hair. This woman was reading from a book, so I plodded down on the floor beside a girl dressed in a peasant skirt.

“Is this the anthro conference?” I whispered to a girl, would soon become my best writing buddy

“Shhh, it’s A Reading,” she whispered back.

I had no idea what A Reading was, but I stayed. And soon I was captivated. The woman, who was Jaimy Gordon and taught at the college and would later go on to win a National Book Award, was reading from her first novel She Drove Without Stopping.

The very next day I went to Gordon’s office, my latest short story clutched in my sweaty hands, and told her I wanted to be a writer. I admitted this shamefully, almost fearfully. She lowered her glasses and looked at me. I was a skinny thing (from all of that running) and my hair was green from swimming in a chlorinated swimming pool.

She skimmed over my story (as I sweated and fidgeted), looked up at me and said, “Welcome to the writing world.”

Well, it was a lot more difficult than I had realized. Writing bad poems was easy; writing carefully constructed short stories with plot and character development and realistic dialogue was quite another (not to mention the gleeful criticism from fellow classmates). Still, I kept with it and my first finished story (by finished I mean I worked on that damned story for over seven months) won the school’s literary magazine award.

It was titled This man, this man who waits, this man who waits for me and was very Joyce Carol Oates-ish, with long and impossible-to-read-without-gulping sentences; the story was about a young woman obsessed with an anthropologist.

I secretly dedicated it to Richard Leakey.